SAMBA 2 is the latest generation audio processor for MED-EL’s active middle ear implant, VIBRANT SOUNDBRIDGE, and our bone conduction implant, BONEBRIDGE. What tests and user experiences have shown for a long time has now also been confirmed by a recent peer-reviewed publication: The sophisticated technology built into SAMBA 2 increases hearing quality and speech perception. Even users who had already achieved very good results with SAMBA experienced significant additional improvements with SAMBA 2, especially in understanding speech both in silence and background noise. Some hearing outcomes measured were even in the range of people with normal hearing.

The approach of the study is multifaceted: On the one hand, it examined how switching from SAMBA to SAMBA 2 affects hearing performance in complex listening situations, subjective listening effort, and general user satisfaction. On the other hand, the hearing success of people with VIBRANT SOUNDBRIDGE (VSB) was compared to that of people with normal hearing. The prospective study evaluated subjects in terms of both objective audiological measurements and their subjective assessments. Measurements were repeated over a period of several weeks, and included 15 VSB recipients and 16 people with normal hearing.

All SOUNDBRIDGE users included in the study had both SAMBA and SAMBA 2 individually fitted. The first key finding was that the audiological measurements with both processor generations brought substantial improvements in the pure tone thresholds compared to the unaided state. The PTA4 hearing threshold improvements (Pure Tone Average, pure tone average at 0.5, 1, 2, and 4 kHz) were similar with both processors—they dropped from 66 dB SPL in the unaided state to an average of 37 dB SPL.

In contrast, there was a clear difference between SAMBA and SAMBA 2 in speech comprehension especially in more complex listening situations—as well as in subjective categories like listening effort and user satisfaction.

In the tests for speech understanding in silence (WRS) and in background noise (SRT), the SAMBA 2 group performed significantly better than the SAMBA cohort. On average, SAMBA 2 delivered 7.3% better results than SAMBA in word comprehension (monosyllabic test in silence). 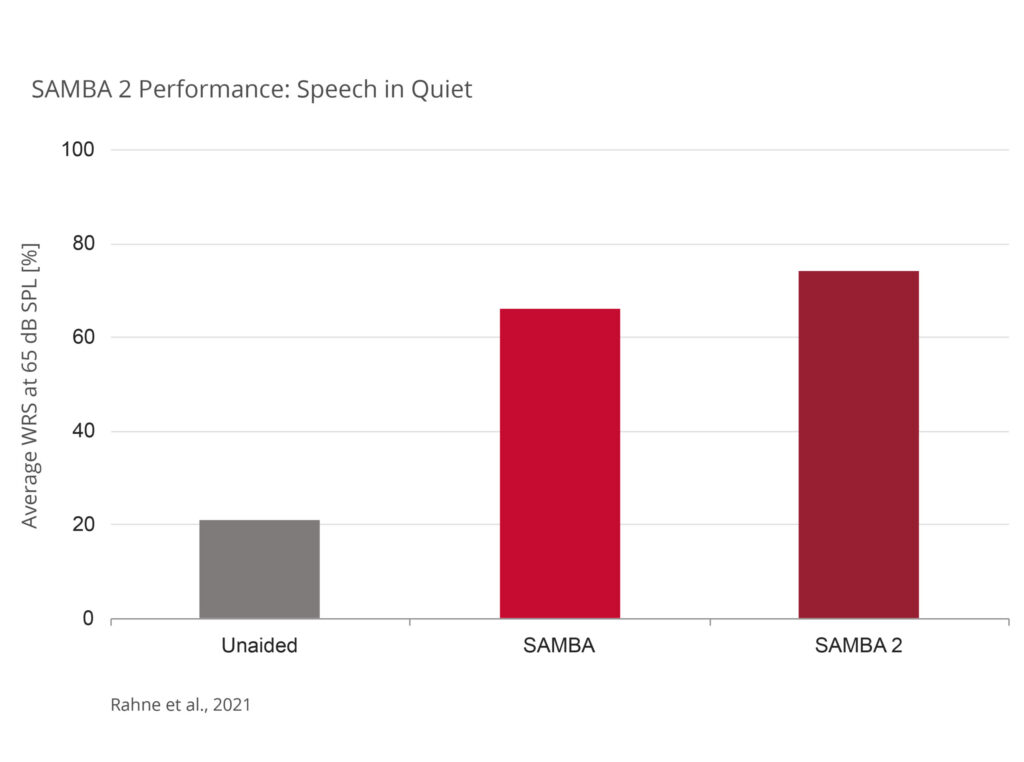 The speech recognition thresholds (SRT50) were recorded in different settings and degrees of difficulty and showed clear improvements in all measurement conditions. Under difficult conditions (with interfering speech noise simulated from behind), outcomes were even more clearly in favor of SAMBA 2—87% of the subjects had better results with SAMBA 2 than with SAMBA. Some subjects in the SAMBA 2 cohort were even able to achieve values comparable with the normal hearing group. The red circles in the following graphic depict the respective mean values in dB SNR. 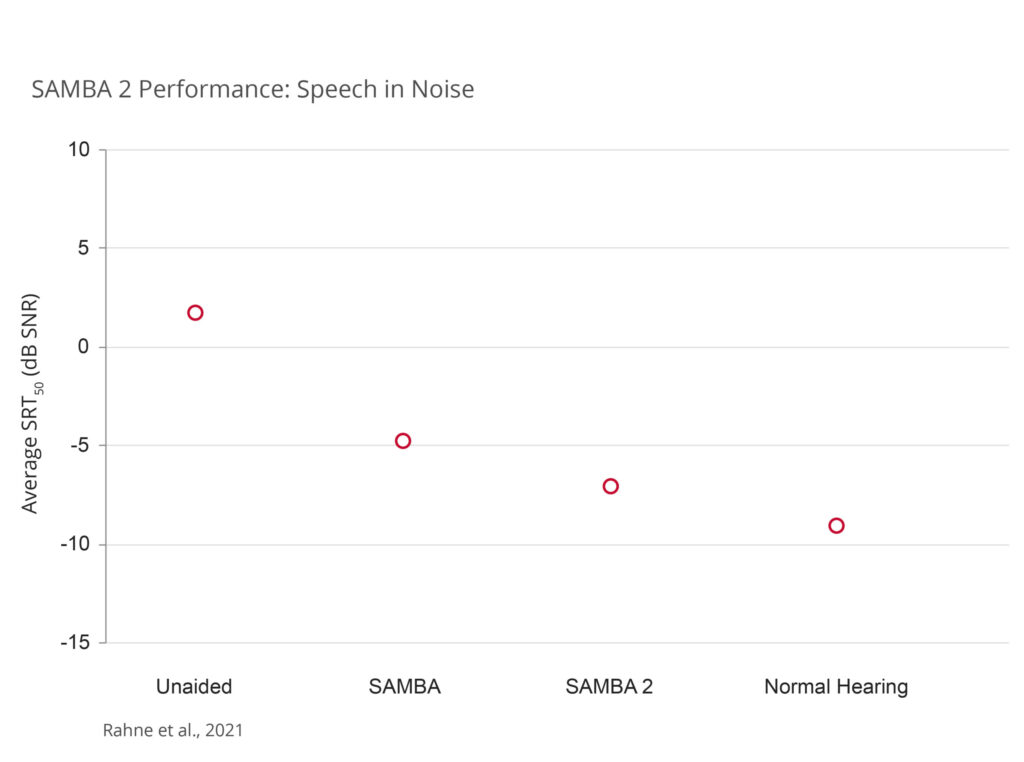 In addition to the objective pure tone and speech recognition tests, subjective factors such as listening effort and individual satisfaction with speech understanding, spatial hearing, and sound quality were evaluated.

The listening effort using ACALES (Adaptive CAtegorical Listening Effort Scaling) shows significant differences between SAMBA and SAMBA 2. 80% of the subjects rated listening effort required with SAMBA 2 as less than that of SAMBA. The “moderate exertion” was an average of 10.8 dB SNR when unaided, 4.6 dB SNR with SAMBA, and 1.3 dB SNR with SAMBA 2. In other words, significantly more difficult listening situations are mastered by SAMBA 2 users with less effort. 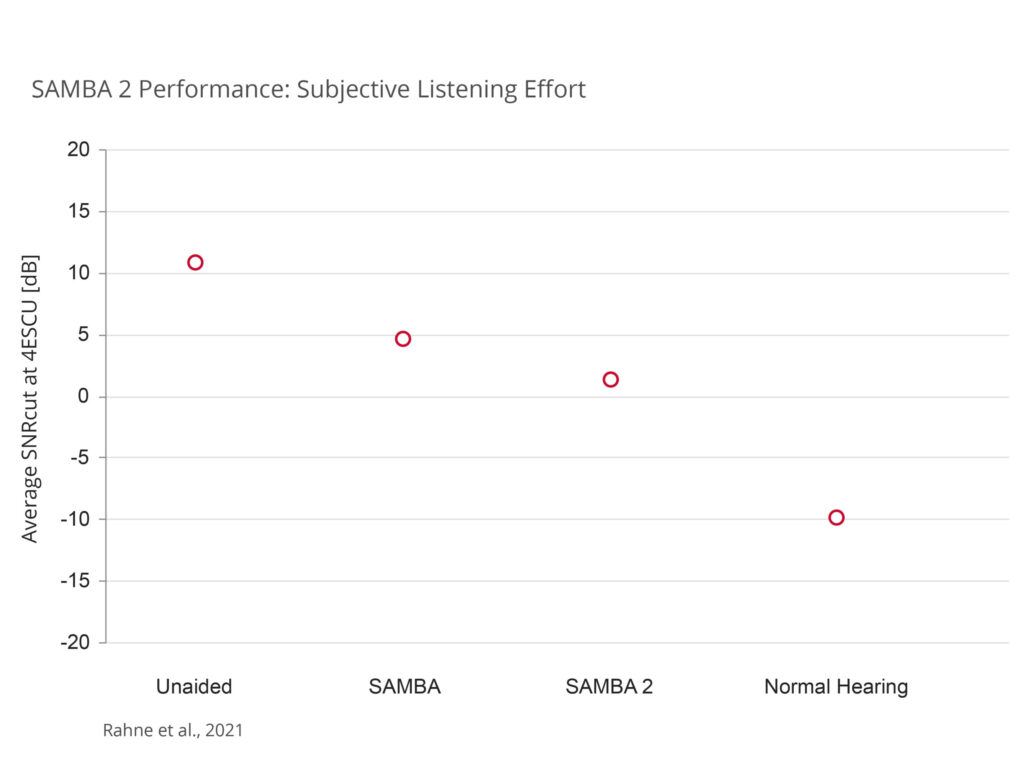 Similar to subjective listening effort, subjective satisfaction with SAMBA 2, determined using the SSQ and APSQ questionnaire, was rated higher than that with SAMBA. The SSQ questionnaire results revealed the newer audio processor is clearly ahead of the older one in all categories: The “overall rating” increased from 5.2 (SAMBA) to 6.9 points (SAMBA 2), “speech understanding” from 4.9 to 6.9 points, “spatial hearing” from 4.7 to 6.9 points, and in “hearing quality” from 5.8 to 7.3 points. 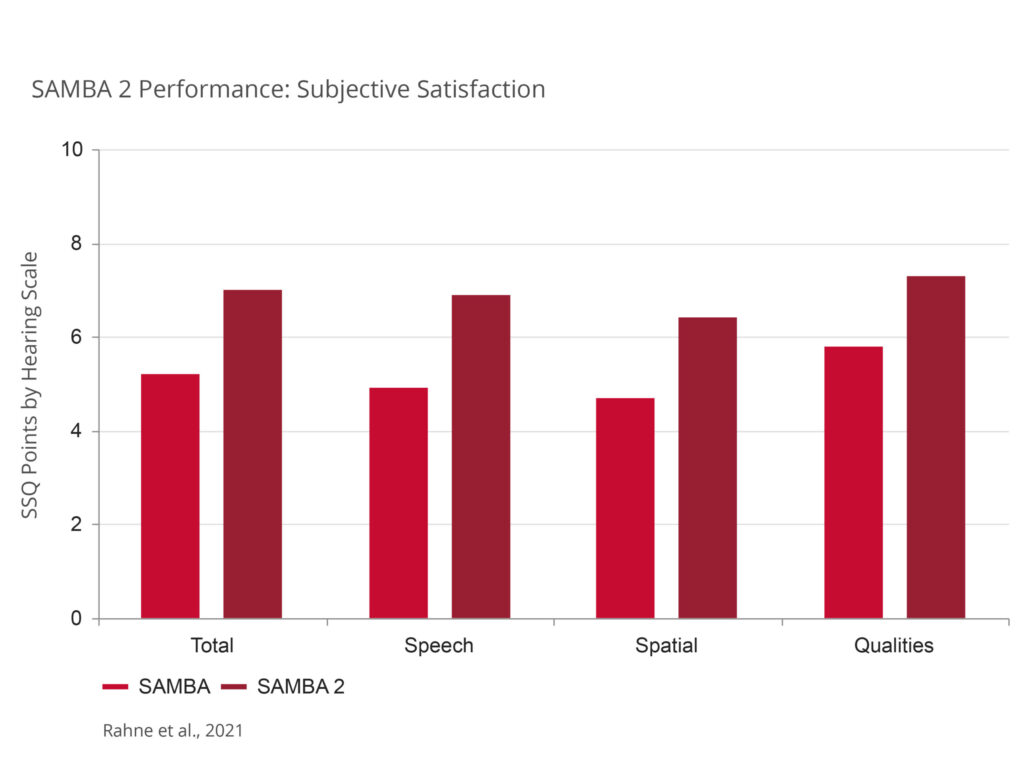 The study shows that SAMBA 2 provides significant improvements over SAMBA in both objective (speech in quiet and speech in noise) and subjective measurements, and that SAMBA 2 users are even in the range of normal hearing in some audiometric tests. Especially in the complex tests for speech perception in a noisy environment, SAMBA 2 users achieved results that came close to those of people with normal hearing.

An upgrade from SAMBA to SAMBA 2 is worthwhile for people with a VIBRANT SOUNDBRIDGE.

The results suggest that SAMBA 2 relies more heavily on its advanced hearing performance technology in more difficult listening situations and when the acoustic conditions are the most challenging. Especially in the presence of background noise or speech noise, many types of advanced hearing technology work together: the improved front-end signal processing that automatically adapts to the environment, speech tracking with its focus on directional speech, along with the filtering and suppression of background noise and disruptive speech noise. And that’s not to mention two additional frequency and compression bands that ensure excellent speech understanding.

Don’t Miss Any Updates From MED-EL

Make sure to subscribe to the MED-EL Professionals Blog to get MED-EL updates sent straight to your inbox as soon as they are published.

Not all products, features, or indications shown are approved in all countries. Please contact your local MED-EL representative for more information.

Copyright All rights reserved © 2021
Share this ArticleLike this article? Email it to a friend!
Email sent!