Why is cochlear implant reliability such an important topic? When a candidate chooses a cochlear implant, they want to know that it is the right decision. They want the peace of mind knowing that their implant will last for many years.

As a clinician, you know how important it is to make informed decisions. Cochlear implant candidates are making a life-changing decision, so they deserve honest and transparent information. They need to be able to set realistic expectations and make well-informed decisions.

Today, we’re going to look at what cochlear implant reliability really means, and why it’s so important to look at the whole picture.

You might have seen graphs comparing reliability statistics between different cochlear implant brands. However, many of these reliability claims only cover a self-defined subset of implant failures. They may even disguise the replacement of a partial implant failure as an “upgrade”.

Are these cherry-picked claims really an honest way to communicate to candidates making a life-changing decision? What happens when you do a fair and unbiased comparison of reliability data between all implants over time? 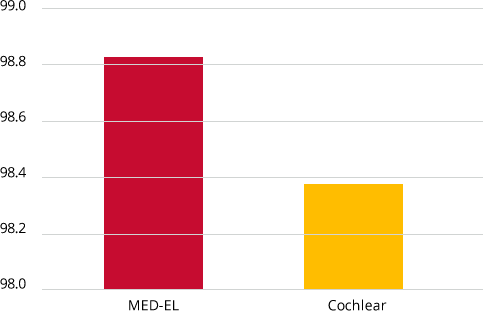 When you examine reliability of all implants over 10+ years, it’s clear that MED-EL offers the reliability your patients deserve.1

With cochlear implant reliability, it’s important to look at the whole picture. Successful outcomes with an implant relies on many factors. Candidates deserve clear information so they can form realistic expectations and make well-informed decisions.

That’s why MED-EL openly reports our extended cumulative survival percentage for more than 10 years. This is a comprehensive reporting that includes every issue, including medical related failures. If an implant has to be removed for any reason, we count it against our reliability in our openly published extended CSR data.

Why do we choose to share such transparent and detailed reliability information? MED-EL has always been privately owned. From the very beginning through today, MED-EL has been guided by our founders, the inventors of the modern micro-electronic multichannel cochlear implant.

We’re focused on our recipients. To us, reliability isn’t just a number—it’s a commitment to providing our recipients with the best possible benefit from their implant.

Clearly, this extended CSR reliability data is essential information for both clinicians and candidates. Yet no other cochlear implant company reports this data. Instead, both Cochlear and Advanced Bionics choose to only report a limited subset of self-selected reliability issues.

Wang et al. (2014) states that “[failure to include extended CSR] should be recognized by the clinicians as an incomplete view which is limited to device survival or failure.” Roby et al. (2012) states “These rates can often be misleading to patients, as it is not always explicit what is considered a failure by the company.”3,4

So, if such limited reporting can be considered misleading to candidates, why do other manufacturers choose to use this incomplete method?

When analysis was extended to include medical-related failures, some manufacturers had failure rates up to 5x higher than officially reported by the company. Perhaps these peer-reviewed studies shed light on why other companies choose to cherry-pick favorable numbers instead of reporting honest, realistic reliability figures.2,3,4

And of course, you can always find our comprehensive reliability reports over at medel.com.

Have a question about reliability and cochlear implants? Leave a comment below or let us know with our simple contact form.

Don’t forget to subscribe to get the latest articles sent right to your inbox!

Not all products, features, or indications shown are approved in all countries. Please contact your local MED-EL representative for more information.

The combined rate for MED-EL implants was calculated using the information on device-related failures from the MED-EL complaint database for the SONATA, CONCERTO and SYNCHRONY implants, covering a time-frame of 11 years (2006 to latest data of July 2017); this database is used as a tool for monitoring of all products that are put on the market, and its validity is regularly inspected by authorities, such as the FDA.

Copyright All rights reserved © 2021
Share this ArticleLike this article? Email it to a friend!
Email sent!